Home Blog Mitigation and adaptation in polycentric systems: sources of power in the pursuit... 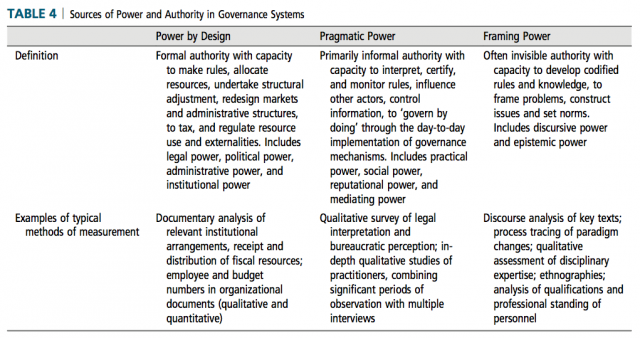 An interesting attempt at a “second-generation” approach to the challenges of trying to analyze polycentric governance: appreciating the potential of the ideas while trying to address limitations and shortcomings. The thesis, and key contribution concerns the need to pay more attention to power and asymmetries in power and their consequences, including not just the “decision power’ of how authority is arranged, but also the “pragmatic power” of those who interpret and apply rules, and the “framing power” of constructing issues, codifying knowledge, and setting norms.

The paper includes a good and concise discussion of conceptions on polycentric governance. It is not as clear about how their idea of power fits with earlier ideas, including power within systems of contestation, such as veto power of political players, negotiating power of a best alternative to negotiated agreement (BATNA), coalitions bargaining over the distribution of benefits, and resistance and the “weapons of the weak.” Given their serious concern for the ideas of polycentric governance, one could wish they had engaged more with the ideas about power that Vincent Ostrom wrestled with, including distributing authority (checks-and-balances) as a means to control rulers given authority by institutional arrangements; and the need for a broader conception of power such as “the use of present means to obtain some future apparent good” (from Hobbes) which means looking not just at the power to compel, “power over”; but at the power that comes from acting together, “power with.”

Abstract: “Polycentric governance involves multiple actors at multiple scales beyond the state. The potential of polycentric governance for promoting both climate mitigation and adaptation is well established. Yet, dominant conceptualizations of polycentric governance pay scant attention to how power dynamics affect the structure and the outcomes of climate action. We review emerging evidence on power within polycentric and distributed governance across the climate, forestry, marine, coastal, urban, and water sectors, and relate them to established positions on power within research on federalism, decentralization, international relations, and networked governance. We develop a typology of design, pragmatic, and framing power that focuses on how and in whose interests power is mobilized to achieve outcomes. We propose that the conceptual model helps to explain power dynamics across different sectors and across both climate change mitigation and adaptation. Significant research challenges arising from the analysis include the measurement and monitoring of the outcomes of power asymmetries over time.” 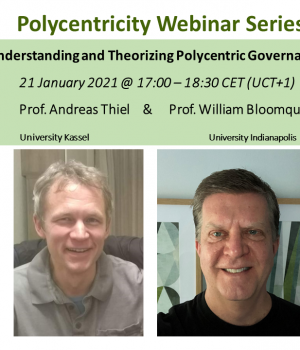 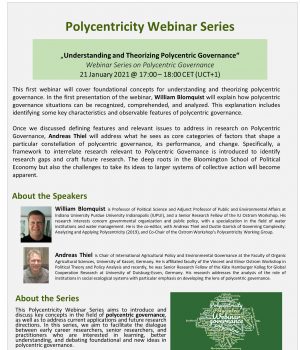 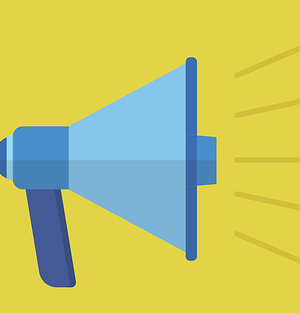 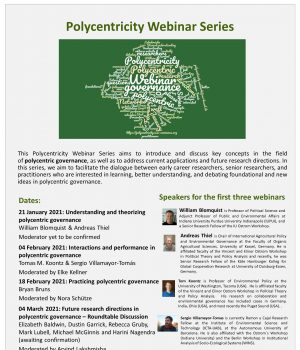 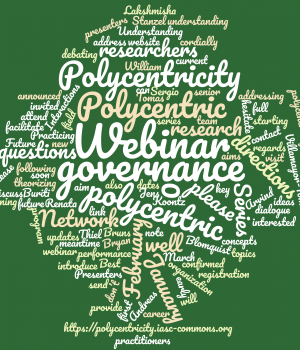 Webinar Series – Save the Date

“Understanding and Theorizing Polycentric Governance” – First session of the webinar...